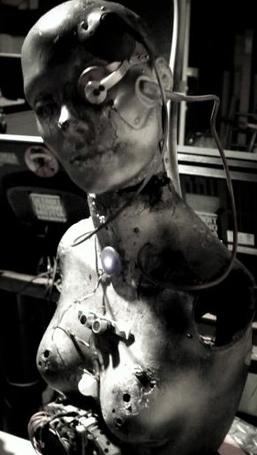 Detronik was developed within the City of Detroit in 1994 as a circuit research and re-development program. The mission was dedicated to opening up factory limitations on older model analogue drum machines and educational toys. Operating under an alias "Synthetic Detroit", Micho was creating complex video sculptures and deploying surveillance drones within electronic music events throughout Detroit in the Mid 1990's.  As demand for visual elements grew in the years surrounding 1997-1998, Detronik became synonymous for creative methods of deploying visual elements as many musicians and Dj's emerged from underground locations in and around Detroit.

Into the early 2000's Detronik selectively worked with Musicians and Events as an independent contractor otherwise known as a Visual Mercenary for hire.   Micho aka Detronik has been contracted by a spectrum of Electronic Musicians and DJ's not only from Detroit, but elsewhere.  In 2010, Micho and Kristine Diven formed the entity "District VII" which became a pseudonym for their emergence into the "Maker" / DIY landscape.  Kristine's talents merged with Micho's work allowed the duo to create their now infamous exhibition series entitled "Odditorium Detroit". ​